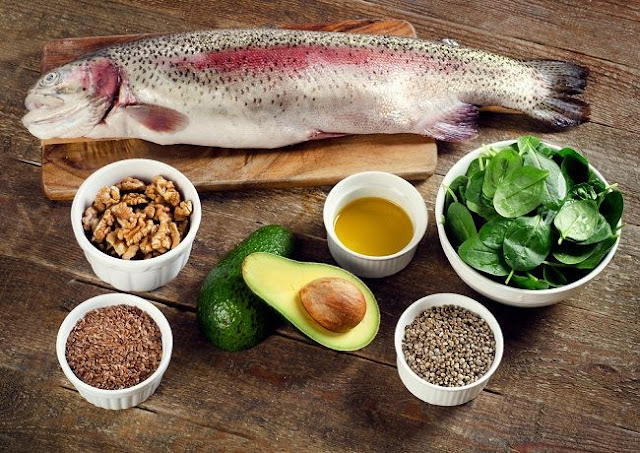 Many benefits of consuming omega fatty acids, especially for health. It is known that omega-3 fatty acids can prevent some health problems, such as dementia or decreased brain function in the elderly (elderly). Omega 3 fatty acids will help improve memory in older people. For babies, there are at least two benefits of omega 3 fatty acids, which help reduce asthma symptoms and help brain development in babies. There are still many advantages to consuming omega 3 fatty acids that can help overcome health problems or help the healing process, such as: Reducing symptoms of schizophrenia, bipolar disorder, and depression. One type of omega 6 fatty acid, Gamma-linolenic acid (GLA), might reduce the symptoms of rheumatoid arthritis. In addition, a study shows that consumption of GLA can increase effectiveness in the treatment of breast cancer. Omega-6 fatty acids in another form, namely conjugated linoleic acid (CLA) are known to reduce body fat mass effectively in a study. Meanwhile, according to one study, consumption of omega-9 fatty acids might reduce inflammation and increase sensitivity to insulin.

Keep an eye on for Supplement Doses

Although it is considered many benefits, but the consumption of omega fatty acid supplements, not to overdo it. The recommended amount of omega 6 fatty acid consumption does not exceed 4 times the amount of omega 3 fatty acid consumption. Some health risks due to excessive consumption of supplements include making the body smell fishy, ​​increasing levels of bad cholesterol (LDL) and increasing the risk of bleeding. For those who have had a heart transplant procedure, it is possible to affect the heart rate. For that consumption of supplements must always be through a doctor's recommendation. Besides in the form of supplements, omega fatty acids derived from several types of fish also need to be aware of, because they have the risk of mercury poisoning. In order to obtain health benefits, don't forget to include foods containing omega fatty acids in your daily menu. Pay attention to the packaging label and recommended dosage. If you have special health conditions, consult a doctor before taking these supplements.

Popular posts from this blog

Boils Are Broken Or Not, Still Needs Proper Treatment

December 15, 2019
Boils can occur on any part of the skin, although more often on the neck, face, thighs, buttocks and armpits. Boils can develop and contain pus. Pus from ruptured boils can flow to the surrounding skin and pose a risk of transmission. Boils can be small or large. Small boils generally do not cause problems because they can disappear immediately. Meanwhile, large boils require treatment. Some boils need to be examined by a doctor to find out the cause and how to handle it appropriately. Treatment of boils at home Boils are generally caused by Staphylococcus bacteria which are commonly found on the skin or nose. Not infrequently, boils form when the skin is injured or bitten by a mosquito, because bacteria are more easily entered. To reduce the risk of bursting boils that can spread to other body locations, you can take care at home so that boils don't get worse. Compress with warm water So that boils open and pus can come out, compress boils using warm water. Take a cloth or…
Post a Comment
Read more